Although traditionally emotions were considered to be disruptive to organizations, they are now being increasingly recognized as providing valuable insight into the behaviour and performance of an individual. Whether we choose to concur with the former or the latter, we cannot ignore the fact that emotions need to be managed. With issues like stress, work-life balance, problematic bosses and peers, etc; employees as well as organizations are beginning to understand the importance of managing emotions at workplace. Emotional Intelligence is the new buzz word and is being talked about in personal as well as business circles. Managing emotions helps to develop psychological resilience in people which is of utmost importance in today‘s world.

The concept of Emotional Intelligence in the area of Human Resources Management has been thought of as highly controversial for a long time. While on one side being aware of one‘s own emotions, managing them, detecting emotions in others and being able to control their emotions is believed to give an edge over others lacking such skills in the business world; counter arguments suggest that Emotional Intelligence cannot be measured and is too vague a concept to be regarded as a matter of intellectual capacity. Emotions as such are complex in nature and difficult to manage. Most people believe that emotions are natural reactions to people or situations and the phrase Emotional Intelligence itself is a misnomer!

Even as the arguments for and against the concept of Emotional Intelligence continue, there seems to be some ambiguity in the idea of the Pyramid of Emotional Intelligence. The starting point or the base of the pyramid is ―Self-awareness or ―knowing your emotions. The second level is ―Self-management or ―managing your emotions. Together, these two levels make up the personal sphere. The third level of the pyramid is ―Social awareness or ―the ability to understand others feelings and emotions‖, and the final level is the ―Relationship Management. These two levels make up the ―social sphere. Relationship management is therefore considered to be the culminating point in the emotional intelligence pyramid and anybody who has made way to this point in the pyramid is said to be very high on emotional intelligence.

The Pyramid of Emotional Intelligence 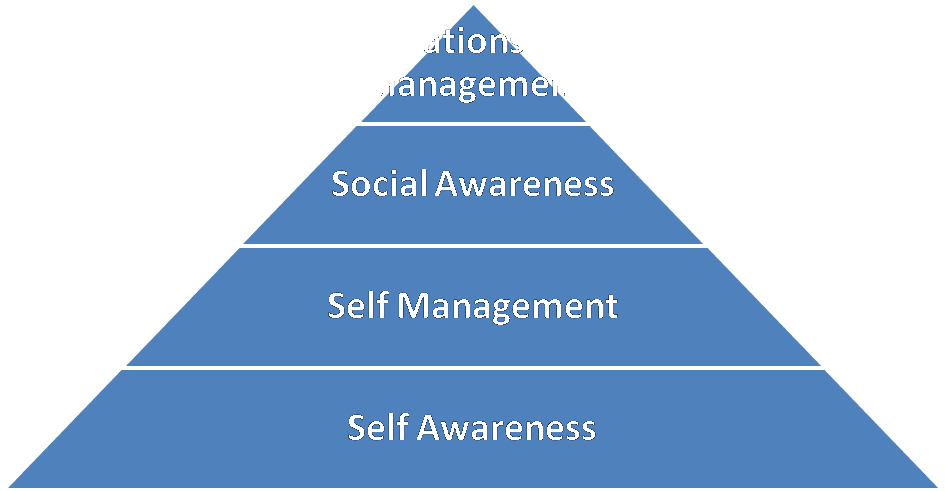 The point to be pondered upon is whether the spheres have been placed appropriately and whether Relationship Management can really be considered as the capstone of the Emotional Intelligence Pyramid. If we go by our experiences and ask ourselves whether managing our own emotions is difficult or managing others emotions, we realize that it is easier to manage others than to manage self while dealing with emotions. Often we find it easier to soothe a grieving friend, motivate a disheartened soul, to give advice and solutions but fail to manage our emotions when we find ourselves in similar situations. Somehow, lending an ear and being a shoulder to cry on or just saying that we understand and we relate to what others are going through, does all the magic that is required. Many a times we are even successful in making others feel better, if not completely fine.

The same is true even in the business setting. Stress could leave us frustrated; rumours could provoke and upset us; Boss, peers, subordinates, all of them have the capacity to fudge with our emotions. Managing self‘ becomes extremely difficult as well as demanding in such situations and the one who has mastered the skill is a sure shot at success. Therefore, even as companies are looking at ways to manage the emotions of their employees, they should instead make their employees learn the art of self management.

The charisma of human nature is in its ability to manage others emotions better than one‘s own emotions. When we learn to understand others emotions and perfect in managing them, we understand ourselves better and as a result also tend to manage our own emotions better. So should we say understanding our own emotions is the building block for understanding the emotions of others or is it vice-versa? In Aristotle‘s words: It is easy to be angry, but to be angry with the right person, to the right degree, at the right time, for the right purpose, and in the right way is not easy. That is self-management which should be the highest point in the Emotional Intelligence Pyramid for he who has conquered himself has conquered the world!

About the Author: This article was written by Lakshmi Divya Vegiraju , BIMT Greater Noida.